In the men’s bathroom, there’s a paper towel dispenser. Imagine that. It’s moved a number of times. Why do you think that’s happened? Take a big guess, just throw your first instinct, right out there.

Yep. People tear the shit down, that’s why. Unfortunately, when it gets torn down, there’s always two gaping holes where the screws were, in its wake. So what do you have to do? Move the paper towel dispenser over another 12”.

Couple months ago, I go in to the Men’s room, see what’s what. I check the paper towel dispenser, see if it needs a refill. Yep. All out. I go get a package of paper towels, return, go to open up the dispenser.

See here’s the problemo, folks. To open the dispenser, you need a key. The slot for the key is on the right hand side. Unfortunately, we’ve had to move the dispenser so many times, it is now basically up against one side of the wall.

What does that mean, you ask? Well…you can’t get the damn key into the slot now, that’s what!!! The damn wall is in the way.

It’s like you’re Harry Houdini, the audience is behind you. For today’s trick, I’m going to squeeze this large hand here (show them the hand), between the wall here, and the paper towel dispenser. Not only that, I will have this little key in my hand, and I will insert the key in the small slot, which is basically up against the wall. 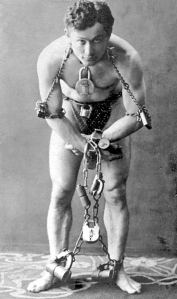