I just finished reading an amazing, eye-opening book by Reza Aslan called Zealot: The Life And Times Of Jesus Of Nazareth. I have always been curious about Jesus. He’s such an interesting character. In the book, Aslan strips down all the BS in the bible, to find the true, historical Jesus. And in many instances, it goes against how we’ve been led to understand this complicated character in undoubtedly the most profoundly absurd book that is the Holy Bible.

According to Aslan’s book, Jesus was not born in Bethlehem, but Nazareth. So, let’s just throw out the whole born in a manger in Bethlehem myth. Nazareth was a very, very, small town a ways away from Jerusalem. Population 100. Most, if not all the residents of this town were illiterate. Which means Jesus was probably illiterate. If you’ve read any of the New Testament, you’ll know that from after the time of his birth, to age 30, there is little to no information about the man they call Jesus. Jesus WAS NOT a carpenter, but a day laborer, which was one small step up from a slave. I believe there’s one short story about Jesus following his family to Jerusalem, getting “lost”, and having philosophical and religious discourse with the elders of the town. That’s about it as far as we know about Jesus as a young adult. I think the reason we know nothing about Jesus at the time is because his real life didn’t fit into the messiah myth. He wasn’t special. But by 30, he meets up with John The Baptist, learns from him, then begins his own ministry.

Aslan points out from the very beginning of the book that the New Testament is NOT a historical account of Jesus, but a bunch of stories written as an agenda for tampering down zealotry of revolutionaries. As the stories of the bible progress, you can see how they change to fit in with the agendas of the Roman people. In one instance, the way Pontius Pilot, the Roman who condemns Jesus to death, is characterized changes a great deal. At first, he asks Jesus, are you the King of the Jews? His answer condemns him to crucifixion. In later stories, Pontius Pilot considers Jesus an innocent man, and proposes to the Jews of Jerusalem, that they can free Jesus, or another bandit. They scream for the death of Jesus. Pontius pilot “literally” washes his hands of Jesus’s death, placing the blame completely on the shoulders of the Jews.

This creative change in the Bible, Aslan attests, was the cause of the next 2,000 years of Anti-Semitism.

By the end of the book, you’re left wondering if there’s any truth about Jesus in the Bible. Let’s throw out all the hocus-pocus and the magic tricks. Let’s throw out a lot of what Jesus says. His ministry was not about turning the other cheek, but bringing the sword to the hypocrisy of the times. Throw out the passion stories. The Last Supper, for one. Stories used to create religious rituals. Throw out all these things,

And what you are left with the Bible, unfortunately, is a clouded view of a man that could’ve actually brought us some truth on how we should live our lives, if we just knew who he really was, and what he truly stood for. 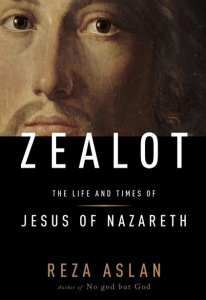