I’ve never really been into conspiracy theories. Sure, there’s probably things we don’t know out in the world. Maybe we’re better off not knowing about those things. 9/11 was an inside job. The government was connected to the JFK assassination. I have no problem with someone seeking the truth. I think that’s what I try to do. But you have to keep it in check. You uncover lies, you look for it, you find it, why is that a conspiracy? It’s just people lying to you, not wanting to be caught. I guess that’s what a conspiracy is. At the end of the month, I really don’t care.

I was daydreaming yesterday, my thoughts have a mind of their own. I don’t know where these ideas come from. Do you? I just try to keep an open idea, maybe these ideas are gifts from some higher power.

I started thinking about time travel. We’ve seen many movies/TV shows about it. See Dr. Who. That show’s been going on for decades. There’s a shout-out to my friend Steve Martin, who introduced me to the show.

Ok, here goes my “theory.” WHAT IF (they always start with that, don’t they?). What if these UFO sightings aren’t really aliens, but us in the future? Time travelers. Boom. This may be a reason why they wouldn’t want to be seen. They can’t be seen. If we actually knew these “people” were from the future, that would change everything we know about the world. We can’t know that that’s true. How much it would change things. But maybe they do.

So why isn’t it possible for us to achieve time travel, in 1,000 years, or a million years? Therefore, why isn’t it conceivable that these lights in the sky are not some aliens from outer-space,

but who we will become in the future. 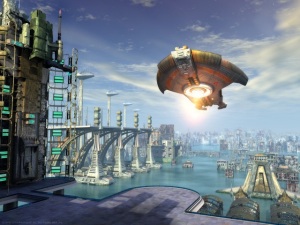 1 thought on “We Are The Aliens”